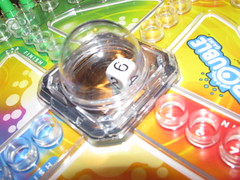 Last night we took a break from the computer and played Trouble.  – Actually it was a modified version of Trouble since we are missing almost all the pieces.  I thought it would be great to clear out the cabinets all all the unused games in our closet and wanted to see if each has all the pieces. I love technology, it’s the majority of my time, but every so often it’s fun to take a break from all the screens.  Since the rules were missing from our game, we used online though to find the rules.  Turns out though Trouble was missing most of it’s pieces.  I was all for throwing it out, but the boys had already gotten excited about playing.  Our game had enough pieces for each of us to have two pieces so we went with that.  Of course my little one

wanted four, so he used two red and two green. (I was green so half the game was trying to figure out which were mine and which were his).  My middle son though informed me that games are more fun anyway when you ’embellish’ the rules.  We really did that!  Everyone got in on the game and we were having so much fun that when the first person finished (the little one) – he just moved his pieces from the end back to home and kept going.

He finally needed to stop for his bath and bed, so we finally had to draw the line and end the game, bu

t it was a fun evening!  Family fun night on the Wii or XBOX are fun too, but there is nothing like making up your own rules to a game that is made up of parts put together from half complete boxes in the closet.

As I went to throw out the game (really only about half the pieces were there), the middle one asked

me to keep it since we had so much fun.  It’s currently sitting on the kitchen table waiting for a decision.  We have a lot of games, both digital and board games – so no one would miss it.  I offered to get a new copy with all the pieces, but so far they seem to prefer the incomplete box we already have.  It looks like family game night is going to be a weekly thing around our house!