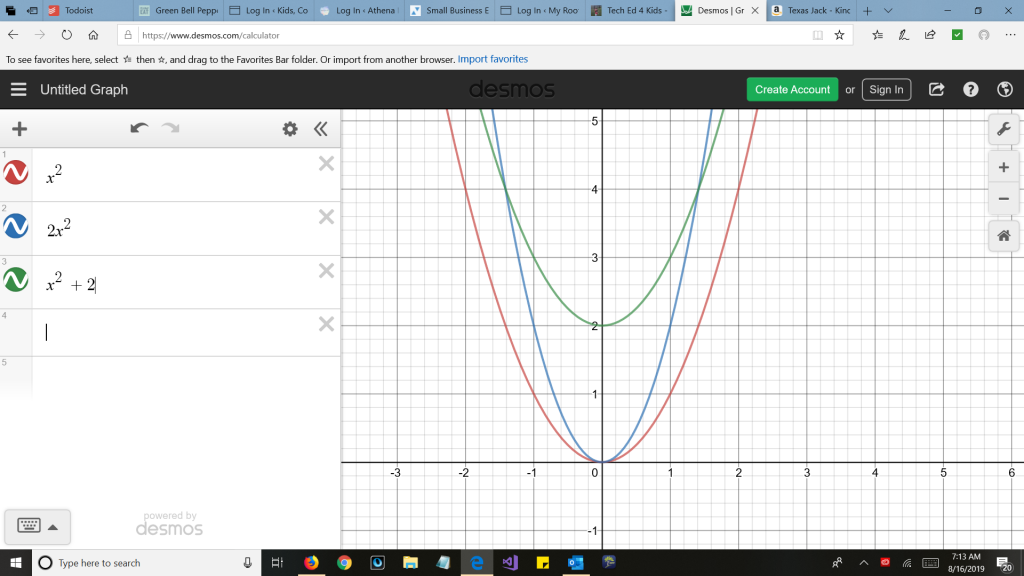 Flashing back on Friday I’m reminded that we didn’t have calculators in school or home when I was in school (similar to the we walked two miles uphill both ways to get to school)! When calculators did make it to school they were nothing more than simple adding machines. Now students have access to not only adding machine type calculators on their phones but also graphing calculators (check out the Desmos web site), and phone apps like Photomath.

We all know that 2+2 can be pretty tough, just look at the math equation that made the rounds the other day on Twitter that stumped a lot of people. Just so you know I think it should be written PE(M/D)(A/S)…. Arguing I think is still going on about whether it’s 16 or 1 (definitely 16) though it would have been better if the problem had included more parenthesis. Personally though I try to avoid adding a long list of numbers in my head (calculator to the rescue).

Graphing calculators become required by the time you reach Algebra II – some students don’t get there and that’s ok… but I think it’s fun and definitely explains everything little clearer if you can see it on a graph. For that use Desmos.com to graph your equations -even on the same graph paper and compare the equations. Sometimes it’s good to even just see if that slope is correct.

On the graph below I have three different lines graphed. I can turn off one at a time and see what effect any changes have to the graph of my original line.

The final tool though is Photomath. I have to say that this one I think can be used for good or evil and I’ll review it more later. It’s an app that can be used to help find a solution and get you on the right track when you are totally stumped or to cheat on homework and solve all the problems. The makers of the app also built in a feature to show the steps when it solves your homework problem for you, so for students that have to show their work, expanding and copying works great until they have to complete the same program on a test in class with no phone. Yikes.

The really cool thing with these are that if kids love math, they can now have all sorts of amazing fun tools that they can use to their advantage. I think my kids spent one whole afternoon asking Alexa math problems that included infinity for fun. (Try infinity divided by 0 and see if you get the right answer? We weren’t the other day) ;0)