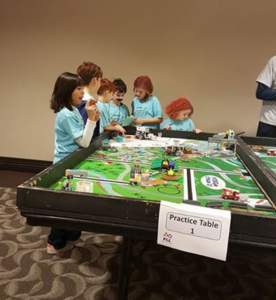 For our kids it was the first regional they had ever attended to compete in… My little one attended as a baby with his brothers, but he was way to young to remember toddling around waiting for his brother to finish at each regional.

It’s tough also to go back as a coach after organizing everything in the past.  Nothing is done the same as what you would have done it, and if you are a type A personality it’s not easy.  After an almost 7 year break since the last regional we competed in – between son 2 and son 3, it’s also tough to come in with all new coaches after having been the go to for questions in the past and now be an unknown.

We came in as one as the only neighborhood team in this particular regional.  One other team was a homeschool team.  The current regional missed some of the pageantry I’d seen in the past, so our kids were ready for anything themselves, and I was decorated too!  Our kids chose to paint their hair, use glitter on their faces, and go with fake mustaches.  That along with their matching shirts and they were ready to go.

The kids had started using the iPad with Bluetooth to program their robot and were able to complete three tasks on the table without touching the robot outside home base.  By the third run, they were chanting for their team-mates and still had plenty of energy.  I suspect as soon as they got home they crashed in bed though, but we were proud of them.

The kids went in on their own to the judges and answered all the questions.  Coaches and parents weren’t allowed to see the judging sessions, so we shall see what the sheets say when we get them back for that.  All in all though they did great for a group of 9 and 10 year olds that were competing for their first time.

As for how to program the robot, they ended up with the iPad and were able to add one command at a time – walking though programs until the robot completed the tasks they wanted it to do. By stepping through one command at a time and testing the robot after each modification the team was able to catch any errors before adding another step.  Debugging long programs with multiple steps is a little complicated when you are first learning a language. By walking through step by step the kids are able to figure out exactly how things work pretty quickly.

The kids swapped the batteries between the first and second run and had accidently swapped the motor cables.  On the first robot run, the reaction of the robot made it obvious to them what had happened…. so they grabbed the robot when it reached home base and quickly swapped the cables.  Everyone was impressed that the team knew exactly what the problem was.

The kids are ready to start earlier and do amazing things next year!