Common Core? It’s probably not what you think it is…. 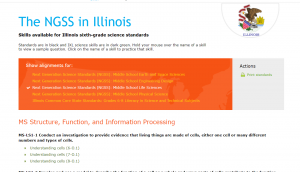 With the new rush to homeschool I see people planning to homeschool that are in a rush to take a break from public school only for the Covid virus with plans to return. The comment I keep seeing is that they are want to do everything like school but they are not going to do common core because they just can’t do math like that….

Common Core was developed for schools to set a standard for subjects like Language Arts, Science, Social Studies, and Math in order to make it easy for students to transfer from one school to another having studied the same general lessons at the same time – so for example… 6th grade in science here in Illinois is following NGSS common core and will be learning about understanding cells as one of their lessons.

Any parent that wants to be able to transfer back to public school at the end of Covid Homeschooling should be aware of the standards for the subjects and grades that they are covering. Including more material is great! One misconception though is common core math. Common core math is simply the standards, but one of the things that changed with common core was for students concentrating on understanding numbers and operations as opposed to rote memorization of facts. By teaching an understanding of mathematics, by the time students reach high school, they should be able to grasp higher math concepts easier as well as scientific methods.

I know at our house we have trouble with the questions that involve estimating…. The questions always give numbers and then ask us to estimate. It’s not here’s a container that is this size filled with marbles, estimate how many marbles are in it. It’s instead, you have 100 people buying 12 tickets each, estimate how many tickets are bought? They want and answer like 1,000 but we always come up with 1,200 because seriously, we have the numbers! So for us that has always been our issue with common core math standards and assignments. I do understand what is being asked, but the way of going about it isn’t exactly the best way in us….

What I see most people object to though is the fact that numbers are disassembled. Addition like 13 + 7 is the same as 10 + 3 + 7. What’s funny is that some of us do that mentally and don’t even think about it. To me 3 +7 is 10. So as soon as I see the 3 and the 7, I take the 10 off and pair the 3 and 7 to get a 10 and I’ve got 20. If it was 33 + 7, I’d do the same sort of thing but it would be 30 + 3 + 7 giving me 40. That’s all they really are doing with common core. It just looks like a lot because to start with they write every step out. This is similar to telling little kids how to do just about anything. First you open the package… No there is a zipper type opening, don’t cut it, now take out just want you want… Wait put the package back in the fridge, don’t leave it on the counter. And step by step it goes. So yes, that’s where common core math goes. You can teach memorization, but the steps that students would learn early will have to get added at sometime.