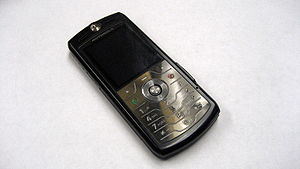 How young is too young?

My kids got cell phones fairly early.  Not 2 years old, but they were not yet in middle school. When we got the each child a cell phone it seemed like a great idea.  We have since gotten rid of our land line making it more important in my mind for the kids to have a way to keep in touch when they are home along.  Now with a younger child I won’t hire a babysitter without a cellphone since we don’t have a phone in the house while we are out.

I remember with our oldest we broke down and got a phone when his class was taking field trips and he began doing more after school activities.  We sent the boys to a private school and they frequently got home late at night with no access to the school – there was also no bus transportation, so with a cell phone he was able to let us know about 30 minutes before they got back that they were almost home.  We lived about 30 minutes from the school so it worked out perfect!   There were frequently parents with phones that they could borrow, but this way I knew there was no question of being able to reach my child at any point.  As he became more involved in activities, his phone became more important to stay in touch.  I’ll admit I wasn’t too happy to get a text from upstairs asking for a sandwich, but it’s still nice to get a message once in a while that he’s still doing ok and thinking of me.  He moved away to a science and math school his Junior year of High School and his cell phone was his best way to stay in touch.

My middle son fought us on getting a phone.  He still hardly uses his phone and is currently 16.  He was just starting middle school when we got him a tracfone. Our thought was that if he lost it, we weren’t really out anything.  He used it rarely, but it did come in handy when he was on field trips.   Now that he is starting to drive I’m hoping he will at least remember to take his phone with him just in case he has a problem and needs it.

Our youngest doesn’t have a cell phone but he does know how to use it. He can do everything from talk to his brothers to play games on our phones.  I can’t see getting him his own yet, but at the point that he starts going out on playdates, field trips, and gets to the point that he can stay home alone I do feel it might be a necessity.

What are the most important reasons to get a child a cellphone?